The Problems Are Deep and the Impact Is Real 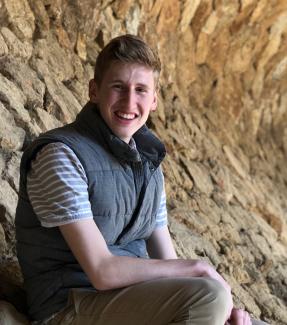 Jackson Edwards C’20 reflects on his time as a Fox Fellow with the Greater Philadelphia Coalition Against Hunger. The fellowship, which took place remotely during the COVID-19 pandemic, exposed Jackson, a Philadelphia native, to the tremendous amount of food insecurity that exists in the city and surrounding communities. He shares how the experience has helped connect with his current job, directing communication efforts for a local church.

What is the Greater Philadelphia Coalition Against Hunger and what do they do?

The Greater Philadelphia Coalition Against Hunger serves a couple of purposes. One of the most important is what I was working on this summer. I’m so grateful for the Fox Fellowship because it gave me such a unique opportunity. The Fox Fellowship gave me an understanding of how as a society we have currently decided to answer important social problems like societal hunger and hunger in our neighborhoods. Hunger is a state, it’s a feeling, but it's more than a feeling; it's a physical state. That is part of what the Coalition Against Hunger does. It educates people on hunger, on the extent to which it is a problem in our city and in our communities. There are regular events hosted by the community educator who is the woman that I was reporting to. The Coalition also created a hotline where anyone in the city or in the surrounding counties of Philadelphia can call if they're interested in signing up for food stamps for supplemental nutrition assistance or SNAP and they can complete the application by phone. This summer, specifically, I was working on helping this aspect of the Coalition's work. The hotline was created so that we could help people who could use another means to acquire these resources. I helped support folks on the website side by creating a how-to guide for signing up for food stamps via the department of human services website in the state of Pennsylvania.

What did you do in your fellowship? What sort of projects did you work on?

The guide was really my biggest project. In doing this work, providing access to resources, and also assisting with the community organizing the coalition does as well, we realize that it's really important to help folks. We didn't only want people to have access to food but to have knowledge about how to access other resources that are out there. We also wanted them to have a sense of - especially for those who are struggling to understand modern technology, who are burdened by having to call in the middle of the work day. There are just many reasons why it may be difficult or a barrier. Another one of which is just you know embarrassment and personal feelings of shame for whatever reason. We wanted to make sure that as few of the barriers real or perceived were keeping people in our society from accessing the resources that are there and so it was really important to create a guide that was usable. To use the language that we're using nowadays, it was an asynchronous resource so anyone can walk through the online application for social services and submit an application with the assistance of the guide. Toward the end of the summer, I was reaching out to existing partners that the Coalition has and asking them how they would use such a guide and for feedback on the guide so that we could understand ways to improve it. We recognized that there was this need, and toward the end of the summer we wanted to distribute it through as many of the partnerships that we have as possible while also collecting their feedback.

What do you feel like you learned through the fellowship?

The Fox Fellowship taught me the importance of listening closely to the suggestions of my teammates. I received the advice toward the end of the summer that ‘if I want to go quickly, I should go alone but, if I want to go far, I should go together.’ I realized that a lot of what I thought was inefficient in social services is actually a way of building partnership and relationships. What i perceived as inefficiency, the laborious work of getting feedback on this single resource, is actually a check and balance on me doing a low-quality job. If not for their feedback, it would not have been as inclusive as it could have been and not as helpful as it could have been. I was constantly learning different angles on how to approach the idea of trying to work for a positive social change through a nonprofit. I came in ready to create a beautiful, what I thought was a modern, sophisticated guide and I got feedback early on that just said the guide isn't readable. What you think of as modern, fresh and appealing to people is actually a put off because it's illegible. It makes the most sense to have dark font on a light background, a serif fonts. And these sorts of pieces of feedback that I once would have laughed at and thought were silly, I realized are actually really informed.

What surprised you about the fellowship?

I was surprised by the humility of people who have been involved at the hyper local level. I mentioned community organizing, the Coalition has an individual named Derek Felton who organizes community groups. They're called VIP (Victory In Partnership), and he coordinates what became a massive Zoom call of local food bank and food pantry leaders during the summer. Many of whom are really members of local religious congregations, many of which are local churches. And he would host a monthly or bi-monthly call with them, and these people have been involved in the community for years and they see the issue of hunger from such a genuine place. They are looking for lasting ways for people to get access to food and the resources that are necessary for survival. Coming in as someone who has fresh ideas, they were really humble to listen to me and to point me to the intractable problems that they've run into.

How, if at all, did the fellowship connect to your future plans for yourself?

Really snuggly, I think. I learned so much about the importance of socially conscious work and that is very relevant in the work that I do here at Roxbury Church. I actually called the food pantry that we run here at the church during my summer internship with Fox and was trying to coordinate with local individuals who were calling the hotline. I got to answer the phone and direct them to resources close by. During COVID, we saw such an increase in calls. The people I was directing and that experience is so tied to my work here because I realized that true long-term change comes from moving together and not from advancing my own ideas quickly.

What advice would you have for someone who's potentially doing this fellowship in the future?

My advice would be to don't be surprised to find a slower pace in this internship than some other internships that you might have had previously. And yet a similar sense of urgency in a lot of the work that we are acclimated with as Penn students. I think Penn does such a good job of creating a high speed highly thought-through environment with high levels of thought. And you know, the local work in non-profit in socially conscious, socially responsible fields, the pace is slower and yet the problems are deep. It's going to be a change of pace and the gains that happen, even if they aren't immediately visible, are real. Recognizing as an incoming Fox Fellow that there have been past Fox Fellows who have served in this capacity now and there will also be future Fox Fellows that you are setting the example for. It's part of a larger system that is moving toward improving our society.

Also, a word of practical advice for prospective fellows is to use the relationships that you develop in your work during this internship for references in the future and as trusted sources to talk to for academic work for future side projects that you're working on. You will be wise to think of all the ways that the connections that you've made this summer are going to benefit you and be useful for making a meaningful impact going forward.

Learn more about fellowship opportunities with the Coalition Against Hunger.
Copyright © 2021 The Trustees of the University of Pennsylvania
Report Accessibility Issues and Get Help
Penn WebLogin