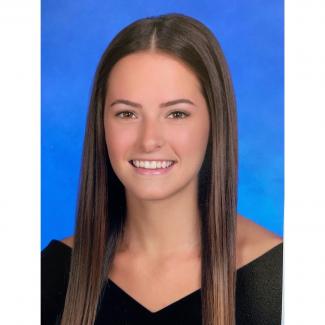 Alexandra Peterson C’21, a Philosophy, Politics, and Economics major from Miami, Florida, has worked alongside Marci Hamilton and her CHILD USA team for over a year. The fellowship experience has inspired Alexandra to pursue public interest law after graduating from Penn.

You have been involved with the CHILD USA team for several semesters. So, what is CHILD USA and what have you gotten to do with Marcy and her team?

Child USA is a leading think tank that works to address child abuse and neglect throughout the United States. The first semester I worked with Marcy her big project was statute of limitation reform for sexual abuse and harassment cases, which is the window for victims to be able to file their claims in court. If there's a certain window of time, once it closes, that's it; you can't return to the issue. Then towards the end of that semester we did some conversion therapy research and how ineffective it is and how it ends up only harming the LGBT community.

This semester we've been focusing on educational neglect. We started doing basic research on the compulsory education laws that states have, their home schooling laws, how the COVID-19 pandemic has exacerbated the digital divide that might have already existed in these states, and then explicit examples of educational neglect that exist in certain states and whether or not states even include educational neglect as part of their statutes.

What do you feel like you've learned through your fellowship?

In the first semester with the statute of limitations reform, I learned how the work that we do has actually made an impact. Marcy has been able to change laws in New York state. It was incredible to see how the research that we were working on was actually being realized in real reform. In interviews I often talk about how I want to be part of actual reform, but it almost seems like this fantasy and like nothing I'll ever do will actually be realized. So, it's been very cool to see the work that we do become realized in state law.

This semester what's been interesting is that the more liberal states have much looser education laws that actually harm students because the language is so vague that they're not able to actually address any cases of neglect. I find it interesting because we see in the media that these more liberal states emphasize how much they want to protect the people and be there for the people, but their actual laws don't exhibit that. The more conservative states seem to have much more clear and explicit educational neglect laws and methods to address it whereas states like California, for example, are extremely loose and allow for a lot of things to be swept under the rug. It has been very interesting to learn.

Going back to statute of limitations reform, just the fact that there ever existed a window in the first place that such a traumatic experience had to be reported - within one or two years - is crazy to me. I fortunately haven't experienced what victims have experienced and when you actually learn about the psychology of how sexual harassment and abuse work, only giving one or two years is just mind-boggling because that's not even enough time for the victim to even begin to process what they've experienced.

Talk to me about working directly with Marcy. What have you learned from watching her do the work that she does?

She's just a beast. The way she carries herself is exactly how I aspire to be a woman in the workplace. She is firm in what she needs to be firm in but also exhibits that compassion and that understanding that comes with being a woman. I feel like she just exudes this grace while also being like ‘this is what needs to get done and we're going get it done’. It's just so impressive to work under her.

How does the fellowship connect to the future plans that you have for yourself?

I'm actually waiting to hear back from law schools right now. I applied mid-November so i should start hearing in the next couple of weeks. It’s kind of scary, but ideally within the first few years of graduating I'd like to do some sort of public service work to get some experience. Obviously, the work that Marcy does informs these prosecutors who are ultimately putting these abusers behind bars. So, it's been great experience seeing how that research translates into what I ultimately want to do with my career. This fellowship has solidified that decision to want to be involved in public service and not just like go where the money is.

What advice would you have for other Penn students that participate in this fellowship with CHILD USA in the future?

Definitely manage up, in the sense that you ask for more work, ask for more opportunities. Ask for more to do, because there is always stuff that these organizations need help with and often, they feel like we're slammed with school, which is true, but there's something to be said about asking for more and wanting to be more involved.

My other recommendation is to make a point of establishing a connection with the other fellows that you're working with in the same organization. I found that to be very helpful, especially this semester.

Learn more about fellowship opportunities with CHILD USA.
Copyright © 2021 The Trustees of the University of Pennsylvania
Report Accessibility Issues and Get Help
Penn WebLogin