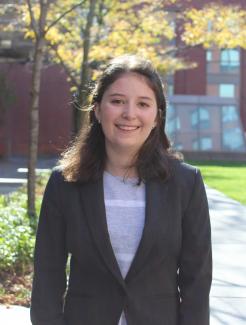 Lindsey Perelman C’23, a Political Science major and Journalism minor from Westchester, New York, has spent her sophomore year working alongside Marci Hamilton as a Fox Fellow with CHILD USA.  While the research can be challenging, especially as the fellows dig into child abuse and neglect, the work has become especially meaningful for Lindsey, as she contemplates her future endeavors. Read how this fellowship has connected to her future goals for herself.

What is CHILD USA and what kind of work do they do?

CHILD USA is a legal nonprofit / think tank with the goal of ending child abuse and neglect in the United States. Under that umbrella, they try to combat a ton of different types of child abuse and neglect. We're currently working on child abuse and neglect in sports and athletics - like the Larry Nassar scandal - as well as in schools where children who are being homeschooled aren't getting adequate oversight from the government or education. We’ve also been digging into schools not providing safe learning environments for their students. There is also a whole other facet of CHILD USA that focuses on statutes of limitations. These are legal laws that dictate when you can sue after a crime has been committed. There are also projects looking at abuse and neglect within the Boy Scouts and religious organizations as well. It's really cool that CHILD USA does a ton of projects and everyone can find something that they're passionate about under that huge umbrella. Marcy is amazing. She's always traveling everywhere from state to state talking to legislators and people in the government of that state trying to change local laws so there's also a political advocacy aspect to it as well.

What did you do specifically in your fellowship? What types of projects did you work on?

We worked on two projects: (1) we did a project on educational neglect and (2) all semester we uploaded stories related to the Game Over Commission. In terms of the first project on educational neglect, there were three fellows and we were each assigned about 15 states to look into. We did a deep dive into the compulsory education laws in every single state looking into what situations a child can be exempt from compulsory schooling, what the penalties would be for truancy, as well as if a child wasn't being taught state mandated curriculum when they're homeschooled and whether the state had an explicit statute that defined educational neglect as a form of child abuse and neglect. Right now we're working on compiling all that information into a huge document that's going to be published and reviewed by all the lawyers for CHILD USA which is really cool. Every week we also had to upload information to the Game Over Commission which is this database that CHILD USA has compiled of every single press clip article related to child abuse and neglect in athletics, especially in gymnastics with Larry Nasser. Every week we had to monitor the articles that were published on related subjects and would upload those articles to the database.

What have you learned through during this fellowship?

The gymnastics scandal has been shocking to me and I feel like it just exemplifies the extent to which child abuse is just swept under the rug by institutions all across the nation. It's not just say the churches but it's sleep away camps, boy scouts, athletics. It's so pervasive, even in speech and debate, which I was a part of in high school. Before I started the fellowship, I wanted to make sure I was fully knowledgeable about the Game Over Commission, so I watched a ton of documentaries about the Larry Nassar Scandal. It was cool because Marcy Hamilton was in some of the documentaries. It was so shocking to realize how it's been just swept under the rug and even people you would think who have an interest in ending child abuse situations don't.

How does this fellowship connect, if at all, to your future plans for yourself?

I definitely want to go to law school. I'm not sure if I want to be a lawyer or a journalist but in both realms the fellowship has definitely helped me. In terms of journalism, almost all the child abuse scandals that we discussed were uncovered by reporters. It's been really cool to read about how the Boston Globe broke the Catholic Church story and how the Indianapolis Star broke the Larry Nasser scandal.

From a legal perspective, I think people typically think of the law as boring and dry and that Penn is just a feeder into those types of situations. It's been cool to see that you can use the law to advocate for marginalized groups and how it's really a tool for advocacy. I feel like that is something that's really great about the organization and how it interacts with my possible career paths. If I were to become a lawyer, I would want to be a sex crimes prosecutor or some kind of advocacy lawyer that is doing something similar to what Marcy's doing. I always love telling people about this fellowship because everyone at first is horrified when they hear child abuse and then they listen to these stories and they're surprised. That's what I think is so cool about this line of work because it's just so niche but so important. The impact you can have as one of these lawyers is monumental.

What advice would you have for other students that are going to end up participating in this fellowship in the future?

I would say definitely stay true to your passions. The reason I was drawn towards this internship is because I actually went to one of Marcy's film screenings in Harrison College House and I remember after watching the film on medical neglect, I was so horrified, surprised and intrigued that I just knew I had to work for an organization that was on the cutting edge of all of these issues. That's the main thing I’ve gotten out of the Fox fellowship - being able to explore my passion in a way that's also applicable to my future career path. So I would say for future Fox fellows: don't do an internship just because of the resume but do something you're passionate about. You can really make the most of the situation if you're passionate about the thing that you're working on.

Learn more about fellowship opportunities with CHILD USA.
Copyright © 2021 The Trustees of the University of Pennsylvania
Report Accessibility Issues and Get Help
Penn WebLogin