The Logistics Involved in Feeding Philadelphia 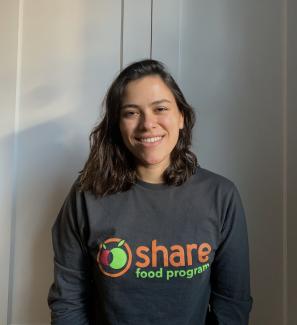 Sophie Weich C’22, a Psychology major from Washington DC, has spent that past few semesters working alongside the Share Food Program, one of the largest organizations in the county distributing food to food insecure community members. She was interested in the position after spending some time volunteering in food pantries in DC. Through the fellowship, she discovered the incredible work that goes on behind the scenes to ensure that food is delivered to hundreds of locations throughout Philadelphia and the tremendous challenge that exists in eradicating food insecurity.

Share is basically one step above what you consider to be a food pantry. Essentially, they get food from the government and from large organizations and then they are the ones who organize and distribute it to the other food pantries in Philly. They're the ones who are organizing all these distributions to churches, community groups, or individuals who would run their own pantries. So it's about staying on top of all of that and staying on top of all of the COVID-19 guidelines with like who can get food where and when and how.

Talk me through what they had you do day to day in your fellowship?

For the most part, the day-to-day operations sort of consisted of helping them deal with things that were falling through the cracks for them. That included calling pantries that have called the Share Food Program and has not had their call returned just yet. A lot of it currently, because we're in the middle of a pandemic, has been people just sort of confused with what's going on and where is the food. It's been a lot of explaining to people what the current operation looks like and it will end up changing in January because they're going to be able to reassess the capacity to partner with new pantries and so I think there's going to be some new additions in January. But other than calls, I worked on the weekly newsletter each week, which was fun and involved reaching out to specific pantries so that we could feature them in the newsletter. There were other projects that I worked on with one of the other people at Share who is doing boxes of food for seniors. So I worked with calling different pantries about that, I helped call volunteers, and I got to do some work with a mapping software that I think I'm going to try to learn more about because I am interested in it and need to learn more before they give me another project with it.

What do you feel like you learned through the fellowship?

I learned a lot about the back side of food pantries and how they function. I had some experience volunteering at a food pantry in DC just as someone filling boxes and actively dealing with the food. This is kind of the other side of the operations that I don't think I was as aware of. But there's obviously a lot of organization that goes into having everything come together and so it's been really interesting to sort of see how an organization this large works, especially because it's grown so much during the pandemic and they've had to really adapt quickly to new things. They’ve nearly quadrupled in size during the pandemic.

I've been surprised - like pleasantly surprised - about how generally kind people are. My immediate supervisors kind of warned me when we started they're like ‘sometimes people are not super nice and I’m sorry about that’ but I've had very few times of people being unhappy with me. For the most part when I pick up the phone and say ‘Hi I'm Sophie. I’m calling from Share Food Program’ people are so excited, and you can hear it in their voices. A lot of people say like ‘Thank you so much for calling us back. I didn't think we were gonna get a call back.’ So, it's really pleasantly surprising to see how happy people are and how much people just want to be giving; they want to be distributing food. It's really nice to hear.

How, if at all, does the fellowship connect to any future plans that you have for yourself?

I think it's been a nice experience for me to get out of the Penn pre-professional track because when I tell people I'm majoring in psychology there's sort of two responses. Either people say ‘Oh you're going to go get a Ph.D.’ or they say ‘Oh you have a BA in psych, you're going to go into some field that's completely unrelated.’ But there aren't a lot of people at Penn who talk about going into non-psych-related fields because obviously everyone at Penn has a Ph.D. or is pursuing a Ph.D. So, I think it's been a really nice experience for me to work outside of that environment and remind myself that there are really meaningful jobs that exist outside of academia. Because, as a junior, I'm starting to think about what I want to do post college, so I think it's been it's been really helpful for me to see that as well.

What advice would you have for someone who ends up participating in this fellowship in the future?

I would say flexibility is key.  It is probably because it was the first semester that they were working with student interns and it's remote, due to the pandemic, which makes it harder, but there was a lot of new projects popping up or something they would take priority over another thing you were working on. I think it was important to recognize that they have a lot going on and just really need help making sure that everything stays on track. Being flexible and being able to roll with the punches was definitely important. But, also just remembering that it's a super meaningful experience and that you're talking to real people who are trying to get food for their communities and it's really rewarding.

Learn more about fellowship opportunities with the Share Food Program.
Copyright © 2021 The Trustees of the University of Pennsylvania
Report Accessibility Issues and Get Help
Penn WebLogin